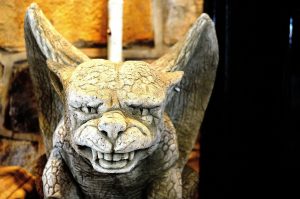 I was riding the bus when I felt a sudden urge to look behind me. What I saw shook me to my core. I was staring at eyes that emanated pure hate. It was as if all the fires of hell were contained in their gaze. The man’s face was so distorted that he looked like a gargoyle. Terrified, I quickly looked away and shifted to the empty seat next to me, trying to put more distance between that guy and me. He suddenly started to speak in a low, rasping voice, and I understood enough to know he was sending curses my way. It was like a scene straight from a horror movie.

Even all these years later, I can still clearly see that face in my mind. I don’t believe it was a natural encounter. The man was human, of course, but that hatred glaring at me had a demonic origin. Why would that guy hate me so much? I was nobody to him. But we know from Scripture that Satan and his demons loath God and his followers with a passion. Maybe I’m wrong, but I doubt a human being can hate to the level I saw in those eyes.

Many will dismiss the existence of demons as old wives’ tales, but we must admit to their reality if we take the Bible seriously. Jesus was continually confronting and being confronted by demons. He didn’t treat them as imaginary beings but as real opponents.

Even if we leave the Bible out of it, how can we explain the universal belief in spirit beings? Is it because humanity is that stupid? (Then how could we trust anything anyone says?) Or is it because people have always sensed the presence of the demonic world? At their core, most religions are an attempt to manipulate and control the spirits around us.

On a visit to the Field Museum of Natural History in Chicago, I somehow ended up in a room displaying idols from all over the world. I was struck by how similar they all appeared, although they were mainly from a time when there was no worldwide communication. Another thing that grabbed my attention? The eyes. They all glared at you. It was as if all idol makers had the same source of inspiration. Coincidence?

If demons are real, then how are we to act? The answer depends on our relationship with Christ. If we are his followers, then we have nothing to fear. Jesus has given believers authority over the demonic world, but that doesn’t mean we take them lightly. I would compare demons to bacteria or viruses. We know they’re all around us, so we take the necessary precautions, but they don’t keep us from living our lives. Instead, and most importantly, we focus on building up our immune system.

In the same way, we must build up our spiritual immune system by such practices as studying God’s Word and praying. The closer we are to God, the easier we can defeat any attacks from the spiritual world.

And if someone isn’t a follower of Christ? I would become one as quickly as possible.