Does Forgiveness Need an Apology? 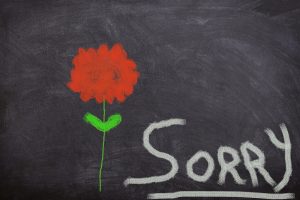 “I could never forgive that person; they haven’t even apologized.” You have probably heard someone say these words, and may have even expressed them yourself. But is an apology necessary for forgiveness? And does forgiving lead automatically to reconciliation?

To get some answers, let’s look at the ultimate example, God himself. While Jesus was hanging on the cross, he made an incredible request, “Father, forgive them, for they do not know what they are doing.” As he was saying these words, the very people he was referring to were mocking him and hurling insults at him. He looked down at their snarled faces and heard their verbal abuse. The pain was shooting through his body, and yet, Jesus forgave them, no strings attached.

Does this mean that Jesus’ tormentors benefited from his forgiveness? Was their relationship with him restored? Probably not. There is a crucial difference between forgiveness and reconciliation: the first is one-sided; the second requires a willingness from all parties involved.

Jesus wanted to forgive, and he didn’t wait for the people who had crucified him to show remorse and take him off the cross. In the same way, when God tells us to forgive others, he doesn’t add any conditions that they must meet. The Lord expects us to pardon those who’ve wronged us regardless of their attitude and behavior. Forgiveness must become our mindset.

On the other hand, God has made it clear that benefitting from his forgiveness is conditional. There must be an apology on our part, expressed in our repentance of sin and faith in Christ. We cannot be reconciled with our Creator until we take this step. God extends his forgiveness to the whole world, but unfortunately, not everyone takes advantage of his offer.

When we are struggling to forgive others, especially those who show no remorse, it’s important to remember what is our responsibility, and what isn’t. Forgiveness is all about our attitude toward those who wronged us. It’s a decision to give up all claims of resentment, anger, and other such feelings against those who hurt us.

Forgiveness doesn’t mean that our relationship is immediately restored to what it used to be. We may never be able to trust the offender again. Reconciliation depends on the willingness and actions of the other people involved.

God understands that many factors are out of our hands when it comes to relationships. But one element we do control: our attitude. That is why he requires us to forgive at all times, just like he did.