Does God Care About Ecology? 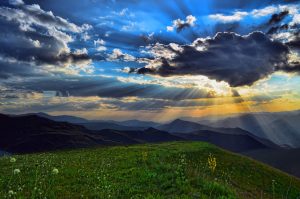 The way we humans treat Planet Earth has been a hot issue for many years. Such topics as global warming, pollution, endangered species, and destroyed natural habitats always seem to find their way into the headlines. Is God indifferent to our treatment of the beautiful world He created? In my recent studies of Ephesians and Colossians, I was struck by the fact that God has a plan in place to undo the mess we’ve made. There is an ecological aspect to Jesus’ death on the cross that I had never thought about before.

But let us first go back in time. When God created the universe everything was in perfect harmony. There was neither death nor suffering. All animals were herbivores and humans were vegetarians (Gen 1:29-30). The rebellion of mankind changed everything. As Paul writes in Romans, the world has been subject to the bondage of decay. He goes so far as to paint the picture of creation groaning as in childbirth (Rom 8:20-22).

The second event that had a major impact on the relationship between mankind and nature was the flood. God gave permission to eat meat only after Noah came out of the ark. What’s more, God announced that henceforth animals would be afraid of humans (Gen 9:2-3). I’m sure this was done for their own protection (the animals, that is).

No matter what we think about ecology, we can all agree that we’ve made a mess of our world! But I don’t want to focus on our destructive actions. Instead, let’s look at what God has done, and still plans to do.

We know that the death of Jesus has enabled the reconciliation of mankind to God. But the cross had a much greater impact than we often realize. In Ephesians 1:10, Paul reveals that the ultimate purpose is to gather everything together under Christ. Paul makes it clear by his use of words that “everything” means all of creation, including animals and nature, and that he is referring to the reinstatement of something that was in the past. In other words, God intends to restore the entire universe to what it was before sin made its ugly appearance. The perfect harmony of all things that existed before the rebellion of mankind will be reestablished.

This message is repeated in other passages as well. In Colossians 1:20 we read about the reconciliation through Christ of all parts of creation. Romans 8:19-21 mentions that the physical world will be released from its present bondage. The curse placed upon creation because of sin will someday be removed. When Jesus returns to rule on the earth, He will undo the damage that we’ve done to our planet.

Why do I mention all of this? Because it deepens my awe of God and understanding of the cross. Because it shows that the Lord is not indifferent to the plight of animals and nature. Because it keeps me from falling into despair over how we are treating our planet. And most of all, because it shows what we can look forward to in the future.

At the very end of the Bible Jesus is quoted as saying, “Yes, I am coming soon.” The Apostle John’s response is the same as mine: “Amen! Come, Lord Jesus.”