Does God Speak to Us? Are We Listening? 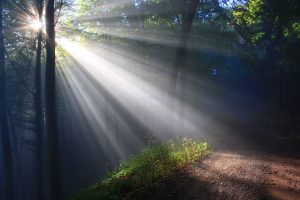 Not too long ago a talk show host equated hearing God’s voice to mental illness. Her words caused an uproar, forcing her to quickly apologize. Frankly, it’s not so surprising that an unbeliever would doubt the ability to communicate with God. But what about believers? How often are we listening for His voice? Should we even expect God to speak to us? I believe so. We are made in His image, and we like to talk, don’t we? So why would God be any different?

Any problem we have in hearing God’s voice arises from our difficulty in listening, not from God’s willingness to speak. The most important way He communicates to us is through the Bible, of course. But not everything we need to know from God is in His Word. After all, I won’t find a verse on what major I should study at university. No chapter will give me the name of the man I should marry, nor tell me how to help a friend in need. So what then? This is where the Holy Spirit comes in! God is just as eager to communicate with us in areas not covered in the Bible as those that are. Isn’t it wonderful that the Creator of the universe is willing to impart His wisdom and guidance in all areas of life?

So how exactly does He communicate? I have found that the most common way is by putting thoughts in my mind. Unfortunately, I tend to dismiss them more often than not! But over the years I’ve slowly learned to become a better listener.

God speaks in all areas of life, big and small. Let me give you a few examples. Just recently I was in a store wanting to buy a kitchen item. I carefully picked it out and headed to the cashier. While waiting in line the thought came to mind, “Go check the clearance rack.” At first I dismissed it, not wanting to take the time. But the thought wouldn’t go away, so I finally obeyed. Sure enough, an identical item at one-third the cost was waiting for me on the shelf!

Another similar situation happened to a friend. She had lost her favorite thermal mug. She looked everywhere at home and at work, to no avail. After about two weeks she finally decided to pray about it, and the thought came to mind, “Check under your bed.” She looked, and there it was! That same day, after praying for help, she found two other items she had misplaced!

Let me move on to a more serious situation. A friend was driving home late at night. While I was praying for her safety the vision of a deer came to mind. This led me to pray for protection from hitting such an animal. When she got home she mentioned that two deer had dashed across the road right in front of her car! She had no idea how she avoided hitting them. Well, actually, she found out why – God protected!

I once heard Joni Eareckson-Tada say that if we suddenly have a thought to help someone else, especially when it’s inconvenient to us, then we can be sure it’s from God. Such urging don’t come naturally. I can give one example of a time when I discarded such a thought, to my shame. An older man was working in the building where I had classes. One evening, as I was leaving, the thought came to mind, “Share the Gospel with him.” It was late, I was shy, and I dismissed it. I think it was the last time I saw him, he passed away shortly afterwards.

How can we tell whether a thought is from God? First of all, the Lord will always speak in agreement with the Bible. God will never contradict Himself, nor will the Scriptures ever need an upgrade. But beyond this basic criteria, I admit it isn’t so simple. There isn’t an easy formula to follow. And yes, we will make mistakes. But Jesus’ words found in John 10:27 give us an important clue: My sheep hear my voice, and I know them, and they follow me. The key to recognizing God’s voice is having a close relationship with God – a knowledge of His Word and a sensitivity to the Holy Spirit. The better we know Him, and the more we seek Him and His will, the less impaired our spiritual hearing will be.

God desires to communicate. How often are we listening?