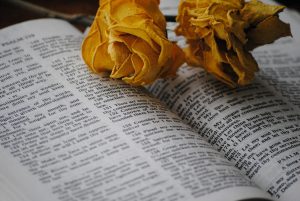 12 That we should be to the praise of his glory, who first trusted in Christ. 13 In whom ye also trusted, after that ye heard the word of truth, the gospel of your salvation:

In the previous verse we learned how believers are God’s own inheritance. The little word “that” at the beginning of this passage indicates that verse 12 shows the result of what was in verse 11. It tells us what is the ultimate goal of our belonging to God.

Let’s first look at the Greek word “glory.” The basic meaning is “an opinion, judgment, view.” In the New Testament it always refers to a good opinion and to the honor that results from such an excellent reputation. The term is used to describe several things: 1) God’s manifestation of Himself in nature and through His acts, 2) God’s character as shown through Jesus and through His followers, 3) God’s supernatural splendor and majesty.

I did a very short internet search to find a good definition of the expression “glory of God,” and what I read only confirmed my suspicions that it’s impossible to define it in a concise way. I think that’s because it refers to all that God is and does, all His attributes and qualities, everything that would cause us to have a good opinion of Him. It’s such an all-encompassing term that it’s impossible to narrow down in a word or two.

Let’s go on to the next noun, “praise”, which refers to “an expression of approval, admiration or commendation.” Paul is saying that God’s glory will be praised because of His followers. So here we see what is the ultimate purpose of our belonging to Him. All that God is, all His acts and attributes, will be put on display for all to see and the result will be praise. How can it be anything else, when God’s mercy, love, justice, holiness, compassion, righteousness (and I could go on and on) are seen in how God treats His children.

Now I know there are those who think that this sounds very selfish on God’s part. He just wants to use us so that He looks good. I’ll admit that I’ve struggled with such thoughts. But we must first remember that God is not like mankind, and we can never compare His motivations to any bad motives we may have. The Bible says we were created “by Him and for Him” and “for His glory” (Colossians 1:16, Isaiah 43:7). This basically means that He created us for Himself so that we can enjoy Him! He tailor-made us so that we can respond to who He is. For example, the Bible says that God is love. And what is the greatest need of the human heart? It’s not by accident. It’s as if He put huge “love-receptors” in us so that we can both give and receive the love that God is. Since His desire is for humans to enjoy who He is, it’s no surprise that He wants His children to reflect His glory. That way others can come to delight in Him as well. God’s behavior isn’t selfish!

Let me move on to the last word I want to cover. The verb “trust” that Paul uses here doesn’t refer to “believe” but rather means “to place your hope in a person or thing before the event confirms it.” This is the essence of faith, and what makes someone a believer. The early Christians, both Jew and Gentile, placed their hope in Jesus as the Messiah, the Savior of the world. They recognized that only He can save mankind from sin and chose to follow Him. Two thousand years later the way to salvation hasn’t changed. Jesus is still worthy of our putting our hope in Him.

What is the source of your hope?