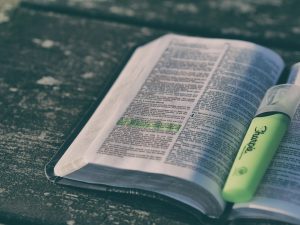 that ye may know what is the hope of his calling, and what the riches of  the glory of his inheritance in the saints, 19 and what is the exceeding greatness of his power to us-ward who believe, according to the working of his mighty power, 20 which he wrought in Christ, when he raised him from the dead, and set him at his own right hand in the heavenly places,

Have you ever looked and looked for something without success, only to have someone else find it at once? The item was in plain sight, but somehow you couldn’t see it.This happened to me a lot as a child. Let’s say Mom would ask me to fetch the sugar. Unfortunately, no matter how long I looked my search was fruitless. But as soon as Mom entered the kitchen she found it!

If we don’t always see clearly with our physical eyes, how much more so when it comes to spiritual truth! This is why Paul prayed so fervently for the Ephesian believers. His prayer focused on their ability to see and understand in the spiritual realm. But what exactly? Paul lists three areas that are effected by their “enlightenment,” in other words, by their capacity to perceive and comprehend.

He starts out by talking about hope. More precisely, Paul desires for the Ephesians to know exactly what it is they can hope for. I need to point out that the Bible uses the word “hope” in a different way than we usually do. It doesn’t refer to an uncertain situation, such as when we say,”I hope I pass the exam.” In the Biblical sense the word describes an assurance of something, even if it hasn’t happened yet, or if we don’t see it.It is the certainty that something is true or will happen in the future.

What kind of hope can the Ephesians know? Paul doesn’t specify, but the Bible is full of reasons to hope. This hope comes from God and touches every area of life: salvation, strength, guidance, divine help, joy, and so on and so forth.Believers have much to hope for, but sometimes they need help to see it.

The second thing Paul mentions is frankly hard to grasp because of the way it’s written (Paul has a knack for that, doesn’t he?). Let me try to make it clearer.We have learned in previous verses that believers are God’s own inheritance.Paul wants the Ephesians to understand that their belonging to God brings Him a wealth (“riches”) of  honor or good repute (“glory”). In other words, God is glorified in His children, and not just a little bit, but a lot! Paul wants them to know that God isn’t embarrassed or ashamed by them. Instead, they bring Him an abundance of glory.

Thirdly,Paul prays for the believers to know the greatness of God’s power that is available to them. The present tense indicates that this power is for now, as opposed to just sometime in the future. The word “exceeding” implies that it is beyond measure, or more than enough in amount. Paul uses four different words with the general meaning of “power,” but each emphasizes a different aspect: natural ability, power being exercised, visible strength, and inherent might.

Paul goes on to give an example of this power in use: the resurrection of Christ! I frankly can’t think of another event in history that would require more power than when Jesus rose from the dead (other than the act of creation of the universe).

The verb”wrought” is the same word from which we get the term “energy.” It means “to exert strength, to be at work or operative.” In other words, God’s power is what was being used when Jesus resurrected. That same power is available to those who believe in Him. I know it sounds too good to be true, and I’m sure Paul would agree with me. That is why he’s praying so fervently for the Ephesians to be able to grasp this important concept.

I don’t think the believers in Ephesus are the only ones who have a hard time seeing and understanding the three truths that are listed in this passage. If Paul needed to pray for open eyes to see, then so do we!