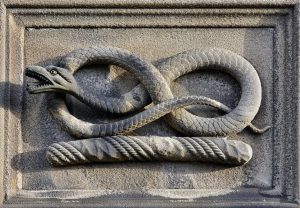 I hate watching horror movies, but the few that I’ve seen all tend to have the same message: Satan is behind evil. Those films delight is showing all the ugliness and terror of wickedness, which is why I avoid them. But they often make the same point that Paul is doing in this verse, namely, that the devil is hard at work in influencing our world.

Starting in the previous verse, Paul is describing the lives of the Ephesian believers before they trusted Christ. He doesn’t mince his words, either. He bluntly says that they were ruled by sin, which touched everything they did. Let’s look at this verse more closely.

The first word, “wherein,” refers back to sin and transgressions mentioned in verse one. The term  “walk” means “to live, or to order your behavior.” Paul is basically saying that the Ephesians used to organize their lives based on sin, which influenced every part of their existence.

Paul goes on to explain what persuaded them to live this way. The word “according to” implies domination and control. The term “course” basically means “age”, but in this context Paul is using it to refer to the whole system of thought of a particular era. In other words, he’s saying that the  philosophies, thoughts, opinions and principles of every age, as well as the whole evil world system, dominate men and women in such a way that they order their lives according to sin.

Unfortunately, Paul doesn’t end there. Something much more sinister than our own evil thoughts and desires is influencing and controlling our world. Paul calls him the “prince of the power of the air.” We can easily guess that he’s talking about Satan, but why such a strange title? That’s because he’s describing exactly who the devil is. The Greek word for “prince” refers to “the first in rank, a ruler.” The term “power” can also be translated as “someone who has authority, a magistrate.” In this context he is talking about demons. Paul goes on to explain where this rule is exercised: the “air,” which mean our earthly atmosphere. Satan is the leader of all the demonic authorities on our planet. His kingdom is where human beings live.

The word “spirit” doesn’t refer back to Satan, but rather means “a way a thinking and acting.” For example, when we say, “They are working in a spirit of cooperation and unity.” The way the Greek text is written indicates that Satan likewise dominates and controls this spirit, which in turn regulates and governs those who are disobedient to God. The word “disobedience” implies being stubborn and rebellious.

To summarize, Paul makes it clear that our world is heavily influenced and governed by Satan and his demons. This started way back in the Garden of Eden, when the devil deceived Eve into disobeying God, and has continued until today. Peter, in his letter,  describes him as a roaring lion looking for someone to devour (1 Pe 5:8). Those who deny the existence of Satan, or who minimize his power, become easy prey.