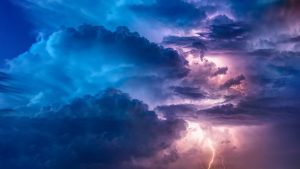 Life as it was before the pandemic is never coming back. No, I don’t mean we’ll never be able to go out in public without fear of catching the virus. Instead, it’s clear to me that the world has taken a giant step closer to becoming the end-time society described in Revelation.

I’m not implying that the end is right around the corner. Jesus’ idea of “soon” (two thousand years and counting) is a lot different than ours! Christ’s return could still be fifty years away, or it may be next year – no one knows.

For those skeptical about Biblical prophecy, I would simply say that I can’t fathom how anyone from the ancient world could imagine – without divine assistance – the things they describe. Even our wildest imagination is loosely tethered to our experience, but they depicted a world that is so beyond anything they knew. Furthermore, is it a coincidence that they so accurately predicted the future? If you disagree with me, that’s fine. Check it out for yourself.

Okay, so what are some end-time prophecies to which the pandemic has brought us closer?

A worldwide centralized authority (1) – Revelation portrays a world under the control of a unified authority. Nation-states may still exist, but by then, they will have lost much of their autonomy. Fortunately, we’re not there yet. Nonetheless, globalists have been actively taking advantage of the present situation to accomplish this goal.

Let’s take the World Economic Forum as an example. They organize the annual meetings in Davos, Switzerland, which gather the world’s top leaders from business, government, international organizations, and academia. The tagline for the 2021 summit is “the Great Reset.” Here’s a direct quote from their website: “The pandemic represents a rare but narrow window of opportunity to reflect, reimagine, and reset our world to create a healthier, more equitable, and more prosperous future.” (2)

The pandemic has energized the globalists as never before. The result of their work will be what we see in Revelation.

An authoritarian system with no personal freedoms (3) – In the future world, all disagreement with the official line will be ruthlessly punished. I never thought I’d see the day when censorship is so enthusiastically embraced as it is today. Even if you agree with the restrictions on free speech, you should be terrified of the apparatus of control that has been put in place. This structure of censorship won’t go away when COVID is gone. Pandora’s box has been opened. The system will find a new target, with Christianity as one of the likely candidates.

This lack of freedom will go beyond speech to include economic activity as well. Dissenters won’t be able to buy or sell. I just recently read that PayPal has started to refuse service to organizations with whom they disagree. We’re not talking about terrorist or criminal organizations – this is simply the matter of a difference of opinion. They’re not only targeting fringe groups, either. I suspect their black list will only grow with time.

The vaccine passports, regardless of good intentions, are putting into place an unprecedented ability to track and control the movement of entire populations. It won’t take much to adjust it to more nefarious purposes.

Instant worldwide communication (4) – In the end-times, the entire world will be able to see events simultaneously. Yes, I know, we’ve had this technology for a while, and the pandemic didn’t give it to us. But it has undoubtedly increased our dependence on it. I mean, who had even heard of Zoom before 2020? The lockdowns have moved many activities online, and a number of them will stay virtual even after the virus is long gone. The pandemic has made the world even more interconnected and dependent on the Internet than it already was.

Societal strife and hate (5) – People in the future will be full of hatred towards one another. Now, I admit that’s nothing new. There’s always been friction within society, but the advent of the Internet has turned it up a notch, and the pandemic has only intensified it a hundredfold. Where has civilized debate gone? What’s happened to kindness and respect? You can’t disagree with anyone without being accused of hating them. It’s so easy to be rude and obnoxious online – hiding behind the computer keyboard – which is why social media is full of nasty comments. People gleefully tear each other down with no thought as to the consequences. I doubt it’s going to get any better.

Why am I even mentioning all this? Is it to make us so fearful and depressed we won’t ever want to leave our homes again? Hardly! All my writing aims to inspire hope, and now is no different (as unlikely as it might seem – but hang with me). I’ve written about these trends because they give us a reason to look to the future with optimism, not despair.

First of all, everything points to the fact that history is moving forward towards a culmination. It’s not made up of random events that are haphazardly stitched together with no rhyme or reason and devoid of purpose. When I see ancient prophecies taking shape before my eyes, it only confirms that God is in control and is working out his plan. Everything has a goal and is going according to schedule. This realization gives me comfort and hope.

Secondly, the end times don’t only mean plague, war, and tribulation. More importantly, Christ is coming back. He will finally defeat the evil all around us and establish justice and righteousness on the earth. Suffering and pain will be no more. The future isn’t as bleak as it would appear to be.

The pandemic has caused many people to live in anxiety and despair, but it doesn’t have to be this way. Jesus gives us a reason for hope. If we can see the end times over the horizon, it only means that his return is near. Thanks to him, his followers can be ready to face whatever the future holds with confidence.