How to Keep Going When You Want to Give Up 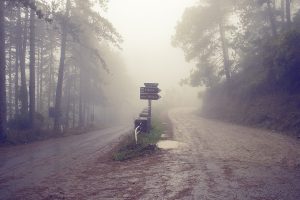 Bryan Anderson was a US Army sergeant on his second tour in Iraq. One day, he was driving at the back of a convoy in Baghdad when a bomb went off. While lying on the ground, he tried to move his hand, only to realize it was missing. He looked down – both his legs were gone – and passed out.

Bryan woke up a week later in a hospital in the United States, with his mom by his bedside. She spoke. “You know you have basically two options here, right?”

Since then, Bryan has exemplified the first option. He endured months of grueling rehab and learned to use a prosthetic arm and legs. He’s acted in films and TV shows, written a memoir, and has worked for various organizations. He’s done more than many people who have all their limbs.

Fortunately, most of us will never experience the horrors that Bryan did. But all of us face trials and tribulations that confront us with the same decision: either move forward or give up. Bryan inspires us to choose hope, no matter how devastating the circumstances.

But how? I’ll admit I’m not a naturally optimistic person. I tend to see why something won’t work before I notice why it will. If I were in Bryan’s place, I would be inclined to shrivel up and die. So I have to work hard at keeping a positive attitude.

God is the source of hope. He is the one who gives us the power to carry on, even when we feel like we can’t take another step. Choosing to move forward is not a matter of trying harder or having stronger willpower. Our strength is finite, and it doesn’t take much to reach its limits. What allows us to keep going is having the proper focus in front of us.

Let me turn to a biblical example – David. He spent up to fifteen years running for his life from King Saul, who hunted him down like an animal. In Psalm 13, David cries out to God, admitting that he’s about to give up unless the Lord helps him. He’s ready to roll over and die.

When at his lowest, a breakthrough happens. David’s attitude makes a 180° turn. “But I trust in your unfailing love,” he declares to God, (2) and he even breaks out in a song of joy. Somehow, the Lord reminded David that he wasn’t alone in the battle and that he could rely on God’s protection, presence, and love. Switching his attention from his fugitive status to the Lord enabled him to fight another day.

Whenever we come to a crossroads of either moving on or rolling over, our focus is what will ultimately guide us. We don’t need to be strong. Instead, we should keep our eyes on the One who is. When we do, the Lord will give us the strength to carry on.