In The Face Of Death – Part Two 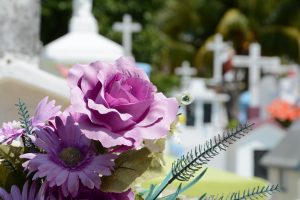 “You better come here as soon as possible!” My brother’s urgency made me immediately do an online search for plane tickets with the quickest connection, but the task was easier said than done. After all, I had an ocean to cross. When the phone rang again a few hours later, which was the middle of the night back in the States, I knew – my father had passed away.

During the next few weeks, while going through all the things that happen when there is a death in the family, I was filled with peace. Of course, there was sorrow and grieving, too. I missed my Daddy! But no matter how deep the sadness, the serenity of mind was deeper still.

How could I experience such peace at a time like this? My thoughts resounded with the words of Paul from 1 Corinthians 15: “Death has been swallowed up in victory. Where, O death, is your victory?Where, O death, is your sting?” Paul was proclaiming that Jesus had completely defeated death! I knew, therefore, there was no reason to fear.

We learn from the Bible that there is more to our existence than just this life on earth. I suspect we all innately know it, too. Death is just a doorway to eternity. Unfortunately, our sin has separated us from God. He could have left us in such a state, but thankfully He didn’t. He provided a way for us to be reconciled to Him. All we have to do is receive this gift of salvation by believing in Jesus as Savior. This, in turn, gives us the assurance of spending eternity with our Creator.

When facing death, we are confronted with what we really accept as true. After all, we are staking our lives, and our eternity, on the promises of Jesus. Are His claims accurate? Is Jesus really who He said He was? I believe the answer to these questions is yes. Without getting into a detailed explanation which won’t fit in this short post (it would turn into a book!), I’ll just say that I’m convinced the Bible is a reliable source of information, and I have seen and experienced the supernatural work of God. Such faith changes not only how I deal with death, but  how I face life – Jesus is worth living for, fully and completely.

I could have such peace when my father passed away because I knew that  he had trusted Jesus. He’s the one who, along with my mother, taught me all about Christianity in the first place. When his life on earth was done, I could rejoice that it wasn’t the end. He continues on, but only now he is in a better place.

When a death is in Christ, Jesus doesn’t take away the grief and sadness. But He takes away the despair and fear.