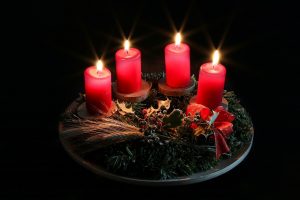 I love Advent, the season of expectation that signals that Christmas is just around the corner. Even though I haven’t been a child in a long time, I still consider the decorations, the lights, and the music to have a magical quality. Advent starts the first week in December, but how would you react if I told you that, in reality, it should last all year long?

To understand my point, let’s first look at what the word means. It comes from the Latin term for “arrival” or “coming,” thereby indicating that it’s a season of anticipating the appearance of someone – in this case Christ. Of course, we associate this period with Jesus’ birth in Bethlehem, and therefore manger scenes of all shapes and sizes become part of the December landscape.

But the Greek word used in the New Testament for Advent refers to a different event: the future return of Christ on earth. When Jesus left our planet two thousand years ago, he promised that he would come back someday to rule. His goal is to restore the earth to what it should have been had humanity never rebelled against God.

When we’re celebrating the baby in the manger, how often do we think about the future King who will re-establish righteousness on the earth? In Catholic liturgy, the first Sunday of Advent focuses on Christ’s second coming, but that’s how it should be for the entire Christmas celebration.

Both the Old and New Testaments are filled with prophecies pointing to the return of Christ as King. Since the predictions concerning his first appearance were so precisely fulfilled down to the minute details, there’s no reason to believe the same won’t happen with his second coming. Are we expecting it? Is it even part of our consciousness?

Undoubtedly, one of the reasons why we’re not looking for his coming is that we’ve been waiting for over two thousand years. Moreover, he said he’s coming back soon, so his notion of time is clearly different than ours. But I wonder if his use of words such as “without delay” or “near” isn’t meant to point to a period of time, but rather, to the fact that his return will be swift once the designated moment has arrived, and nothing will be able to stand in his way.

We can’t separate the baby in Bethlehem from the future King of the world. Celebrating the one should mean looking forward to the other. Many of the promises associated with Christmas – peace on earth, good news of great joy, Prince of peace, the Messiah reigning on David’s throne, etc. – won’t find their ultimate fulfillment until Jesus rules the earth.

Advent, therefore, should be a way of life where our actions and priorities reflect our expectation of Jesus’ return. If his second coming doesn’t impact how we look at life, we don’t fully understand what Christianity is all about. Even if he doesn’t come back during our lifetime – a high possibility – we’ll still face him someday. The question is, are we ready?