What Is a Step of Faith? 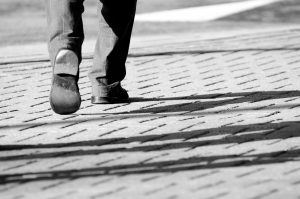 When I was a child I enjoyed watching a show called “The Invisible Man.” The main character was, as the title suggests, hidden to the normal eye. He had to put on clothes and a mask whenever he wanted to be visible. In the same way faith is unseen, since it is a matter of the heart. But there is something that enables it to become visible on the outside, which is clear evidence of its presence: a person’s actions and lifestyle.

I would like to focus on one particular aspect of this proof of faith: the need to take a step. After all, it’s not by accident that the term “step of faith” is in our vocabulary. It illustrates the truth that faith always requires some kind of action.

Let me give you a few examples, starting with salvation. The basic message of the Gospel is that a person who believes in Jesus as the Savior of the world is reconciled to God. He or she gets to enjoy a relationship with the Creator, starting in the present and lasting for all eternity. What step is required in this case? The Bible makes it clear that believing means more than just acknowledging the truth of the Gospel. It implies taking the step of asking for salvation, while repenting and committing oneself to God.

Let’s move on to another illustration. In 2004 the Evangelical Methodist Church in the city of Kielce, Poland, became convinced that God wanted them to build a new building. They had outgrown the tiny house where they were meeting. There was only one problem: they had no money! (minor detail, right?). Nevertheless, with fear and trepidation, they decided to move in the direction God was leading them. They took the step to tear down the existing house. In less than a year they built a large building that met the needs of the growing church.

I would like to share an example from my own life. About ten years ago I become convinced that God wanted two friends and I to publish a songbook of worship music in Polish. We knew the idea was crazy, but it was the task the Lord had set before us. With fear and trepidation we took the step to accomplish this project, and after two years of work our songbook, “Tylko Jezus” (Only Jesus), was published.

The Bible is full of examples of people who believed, and then showed it by taking a step of faith. Noah had to build the ark. Abraham had to leave his country. Joseph had to go through with the wedding to a pregnant Mary. Peter had to put away his fishing boat.  I could go on and on, but I think you get the point.

Not all steps of faith have to be big, of course. Much of the time we make decisions in routine and mundane areas of life, and such choices will also reflect our faith, or lack thereof. Sometimes a step means rejecting something. For example, a friend of mine was convinced the Lord didn’t want her to accept a job. With fear and trepidation she said no, despite not having another employment offer to fall back on. This  decision opened the door for another job that was much more ideal.

Over the years I’ve often been in conversations with people who expressed the desire for faith, but claimed to be unable to have it. What they probably meant to say was that they couldn’t take the required step of faith. If I were to guess, the reason was most likely fear. They were hardly unique. Don’t you think Abraham was afraid to leave the only home he knew? Sure he was! What about Joseph and Mary? I’m certain they were terrified. Even the Apostle Paul asked for prayer to overcome his apprehension. Fear is a natural reaction to the unknown – especially when God’s will appears to be so crazy! But none of these heroes of the faith let that stop them.

How can we overcome fear and step out in faith? By focusing on the One who asks us to do so. By remembering who God is, what He has done, and the promises He has given us. By asking for His strength and grace.

So go ahead, take that step of faith!